Well, I'm getting the hang of this! Apologies for lateness; busy weekend!

This week I've decided I'm going to be more brief about what I'm doing and focusing on certain areas that I feel I will need to teach. I will give a brief description of what I've done for the week, but the focus will now go onto producing course material. The photos on here are not even a tenth of the pics I have taken, so i'm building up the resources!

Monday:
CPIT Tradefit site sub, 11kV and 400V XLPE joints into the back of circuit breakers with Steve. Also Inspection of terminations in boundary boxes on Russley Road.


Tuesday:
Remove parts from old breakers at Connetics and install in two breakers at CPIT Tradefit site sub with Steve. 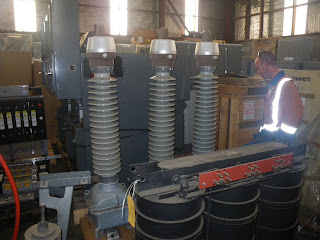 
The first skill I wanted to cover in detail  is lead wiping. This is soldering on a large scale to maintain older cable waterproof and earthing integrity when joining with another cable using the Tyco kits. This skill is rare and Orion in their foresight have elected to keep using it even though other methods are available.

The lead wiping is to construct a blob of solder connecting the steel armour of the outside layer of the cable onto the stripped internal lead armoured layer. This also stops the pitch (tar) under the steel layer seeping into the joint.

I decided to video this being done (I've taken a lot of photos of it being done already) and this will be another way of keeping the skill alive. The video will be integrated into a 'moodle' website that I will be developing to consolidate the teaching with.


The next item I wanted to cover in detail was the 'spiking' of cables. This is the 'last line of defence' for cables to ensure they will be isolated (disconnected from the supply voltage) before being cut into. All possible testing is done beforehand, but to be fully sure, a metal spike is driven into the cable using a blank cartridge (44.40 calibre) tool. If the cable is still live (very rare!) then the spike will cause protection (fuses or circuit breakers) upstream to open, and ensure the cable is safe to work on. The cartridge is operated using a long cord so distance can be maintained for safety (paramount!).

And another.. Shear bolts.
Shear bolts are used in the final connectors to create the actual cable termination(s). The beauty of shear bolts is that they are designed to shear off at a certain torque, that being the best possible torque to make the connection safe and conductive. A similar system was used on aircraft carrier catapults historically, to hold the plane back until the steam pressure that drove the catapult reached a high enough level to launch the aircraft.
The bolts also eliminate the effect of aluminium oxide, which is an insulator and forms on aluminium surfaces within minutes of exposure to air by 'grinding' the oxide off the surface of the conductor. The inside of the bolts contain a white conductive paste to further assist conduction.

Here are two videos of shear bolts in operation. The first using a battery driver to shear, and the second (due to a flat battery!) using a socket driver.

To teach these skills, practical demonstration is a must. Tradespeople being predominantly visual/kinaesthetic learners, then teaching focusing on these learning styles is paramount. Vygotsky's 'cognitive apprenticeship' theory is fully applicable here and is commonly used in the trade (as with most trades) with the 'master and apprentice' formula being well used at Connetics. Due to the high cost of jointing kits, and the 'take your time so you do it right' attitude, practical summative assessment should be restricted to one attempt only (if possible). On job assessment could be used as the resit? Certainly this is something I need to think about.

Tip this week: Using kevlar string to cut through the outer layers of insulation to the neutral screen enables you to not damage the neutral (earth) conductors (Steve).

Looking forward to next week: 33kV jointing in Timaru!
Posted by Andrew at 8:24 PM No comments:

Courts on the corner of Manchester and Hereford Streets. This was considered to be one of the iconic casualty sites of the magnitude 7.1 earthquake of September 4 2010. This building was also the first 'skyscraper' in the Southern Hemisphere, being of brick construction and 10 storeys tall. The building was demolished due to concerns about its structural integrity. During demolition, an electrical kiosk was damaged, and the decision was made to move the kiosk location and replace it with a new one. Traffic lights and street lights were damaged also.
I was working today with Ivor, Reece, Jeff and Jamie.
Connetics, being owned by Orion (Christchurch's electricity network owner) and having a staff complement of 250, has specialist digging crews and machinery. This is extremely useful as the cable jointing crews can concentrate on the jointing rather than have to dig holes.
﻿


We arrived onsite to the cables that needed joining being exposed. There were three 400 volt 3-phase PILCA-XLPE joints to be completed. PILCA is the term the jointers use for paper-insulated lead-covered armoured cable. XLPE stands for cross-linked polyethylene. XLPE is a far more 'modern' type of cable, of which the jointers have differing opinions. Some prefer the older type, and some prefer the newer type, but Orion decide what must be used.
Kits are once again used. However, outside of the kits' instruction, the PILCA join is done differently. Orion specify that 'lead wiping' must be done. This process is essentially soldering on a large scale. The reason that the guys told me the wiping must be done is that Orion want to preserve the skill, and a skill it is. The jointers take pride in their joints and even have wee 'competitions' on job as to who has doe the best wiping! The wiping itself is the act of preserving the insulation and hygroscopic integrity of the cable. The kit uses a type of copper 'spring wrap' as the equivalent.

Other parts of the kit include heat sink, which comes in specific shapes, different types of insulating tape, the mechanical lugs with 'shear bolts', void filler, and copper mesh tape.
﻿
﻿ ﻿
﻿
﻿﻿﻿
﻿﻿﻿﻿
﻿ ﻿
﻿


During the jointing, I was able to observe the installation of a light pole (low-pressure sodium vapour lamp) by the streetlighting crew, who I will be spending time with later.
I also did three joints of a PILCA-XLPE joint under Reece's supervision. Enjoyed getting in there and getting involved! A good piece of advice Reece gave me.. ‘measure twice, cut once’. Makes sense!
Once completed and tested, the joints are covered with crusher dust. The council organises the final covering (footpaths, etc.).


Wednesday 2nd February
This day was split into two; I was at Christchurch Airport in the morning, and the CPIT Tradefit substation in the afternoon.
At the airport I observed an 11kV-11kV PILCA-XLPE transition joint (getting the jargon now!)
There was a very strong northwest wind blowing, which created particle and dust hazards, which made life difficult.


11,000 volt joints, as opposed to 400 volt joints take longer, as the cable is different, having additional layers in the insulation such as semiconductor, which reduces eddy currents in the shielding.
﻿
﻿﻿
﻿
﻿
﻿
﻿
﻿ 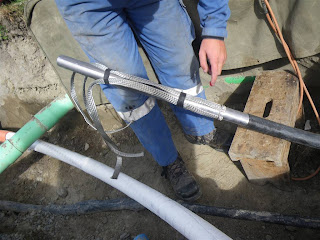 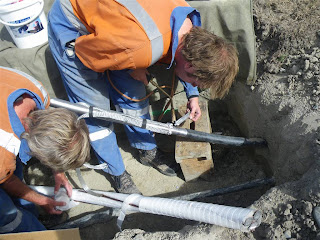 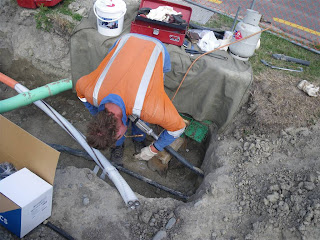 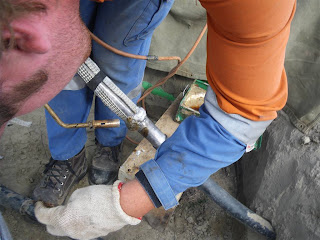 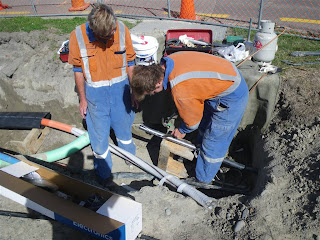 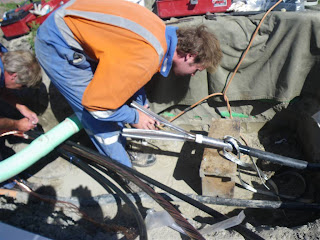 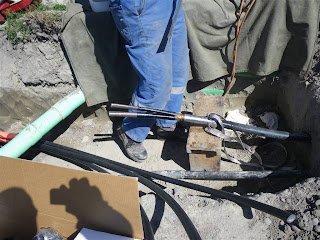 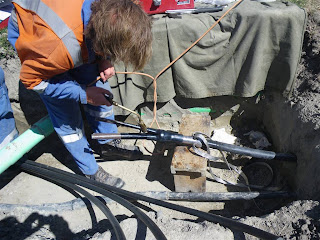 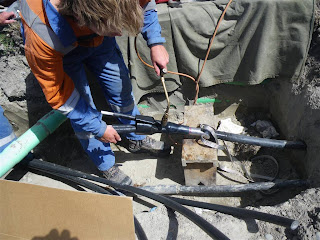 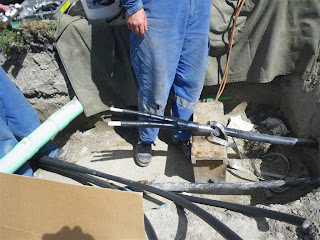 
I was taken to my next job before I could get earthing and finished pics..!

CPIT Tradefit afternoon and Thursday all day
The 33kV Tradefit site at CPIT Ensors Rd campus has been donated by industry and will be used by industry for training. This installation needs to be finished soon as there is lines competitions there in April.

I was working with Ivor and Steve at the site, which involved the termination of 11kV cables into large switchgear in the substation.

We discovered a 400 volt cable had been left out in the sun uncovered and had its outer insulation failing to UV radiation. I organised it to be covered ASAP.

Steve and I also cut some extra cable from massive drums, making sure to re-cap them when we finished. The measuring of the cable run and the cables were done with fibreglass tape measure to be as flexible as possible around corners.
﻿
﻿
﻿
﻿

Highlights of the day;
Steve's tip- When connecting into substation circuit breakers- ‘red right rear’ this enables the front of the breaker has correct phasing red/white/blue.
During the day, the 'test room' guys came along and tested the phasing and continuity of the circuits using an ingenious system of batteries. R-W 3 volts, W-B 6 volts, B-R 9 volts. Clever!