Poles in on the 66kV line from Bromley to Dallington, time to run the conductors (lines). 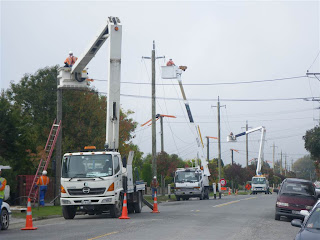 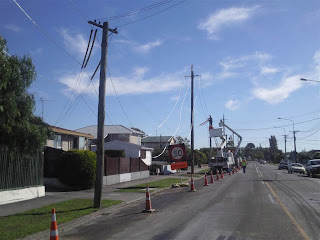 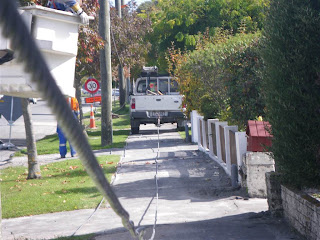 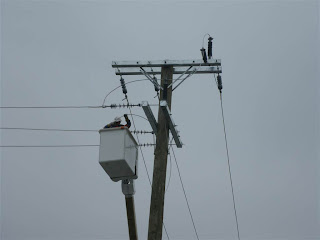 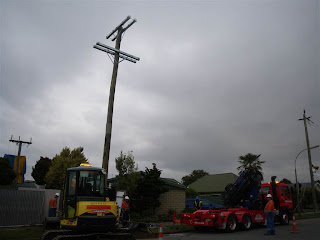 
Unprecedented in Christchurch, these lines are a 3-year 'stop gap' to keep electricity running in Eastern Christchurch. Easier to maintain and repair than underground 66kV cables, these are a sensible solution in the meantime until new underground cables can be run. Orion has produced a time line of work they want done on the Christchurch network HERE.

Now that the poles are in place, which are effectively the anchor points for conductors, the conductors can now be run. Preparation for this involves having drums of the conductor loaded onto big cable drum rollers on trailers.


Once the insulator protection is in place, and rollers are installed in place on the poletop insulator arms, the conductors can then be run. Depending on the length of run, they can be pulled by hand. The trick is to thread them up and over all associated overhead services. High Voltage rated gloves are worn by all Line Mechanics in case the conductor does contact live conductors.

The 'ends' of each run are terminated using 'pistol grips'. These are specially shaped crimps that form conductor terminations at corners and junctions. The 'pistol grips' are tightened using hydraulic crimpers.


I was also lucky enough to observe Independent Lines' Line Mechanics' solution to getting across the Avon River without contacting any of the sewer-ridden water. See below (note, this is not a 'standard procedure'!)...

The video below shows a tour of the circuit from Dallington to Bromley.


Next week: Final terminations and connection into the substation.


As with all trades, all electrical careers carry technical terminology. Some descriptions have multiple terms, for example, a conductor of electricity (I've used 'conductor' in this weeks' blog), can also be termed line(s), wire, cable, mains, straps, links, amongst many others. What is really interesting is the terminology changes for each different occupation. Clearly the occupation 'Line Mechanic' refers to conductors being 'lines', whereas Cable Jointers do use the term 'conductor'. House wiring electricians also use the term 'cable' and wire(s), but the New Zealand Electrical Wiring Regulations 1997 (2010 Revision) calls them all 'conductors', which is why I use that particular term.

Other terms are linked to the course theory. For example, what is voltage? A simple, accurate description of voltage is not really that easy. Analogies can help here; voltage can be described as electrical 'pressure'. If we consider the 'flow' of electricity, which is linked to electrical current, be compared to the flow of water, instead of valence electrons (the outer orbit electrons in an atom), which is what current actually is.

Voltage can be described as the pressure of the water in a pipe, current the speed of flow of that water, and insulation being the pipe outer, which is holding the pressure in. If the 'insulation' fails, the pipe will leak, however, electricity needs a conductor to 'leak' through. A spade or or digger bucket conducts electricity nicely, being made of metal, and can result in accidents if they contact a conductor. Unfortunately, even though humans conduct poorly, the can, however conduct well enough to be killed by electricity.

Electrical theory, being a subsidary of the physical sciences, uses a substantial amount of mathematics, so theory must encompass an understanding of mathematical terms, particularly SI units (The International System of Units (abbreviated SI from French: Système international d'unités) uses different terms for large and small numbers. For example; "'I travelled 120,000 meters to Tekapo", clearly kilometres is used to describe the distance more easily. 66kV=66,000 volts.


Trainees need to be encouraged to self-research terminology to understand it better. Electrical theory is difficult, and is widely regarded as one of the most, if not the most technical trade. There are literally thousands, if not millions of resources online, and other resources such as libraries should be encouraged. On-job instruction sometimes may not be good enough to satisfy a trainees' thirst for knowledge on a particular topic. The key is to reference the trainee to trusted sources.

For myself, as a tutor, familiarity with the multiple similar terms cable, conductor, wire, etc. is needed to explain theory to trainees/students. A 'pocketbook' should be encouraged, as most trainees and tradespeople carry one to take notes and appointments. Essentially trainees need to 'learn how to learn'. This I believe is not just part of becoming a tradesperson, it is part of growing up and becoming an adult.

Reflection on first week in Lines:


On Monday, I went to the yard, where Phil (my primary contact at Connetics) introduced me to Peter (Head of Lines), who in turn introduced me to Carl (Leading Hand). Carl would be my supervisor also for at least the 66kV job we were to do (covered later in 'Analysis').

I had a fantastic time, getting the taste of a whole new ballgame in lines. Compared to jointing, where nearly everything is underground, this week involved digging three-and-a-half metre deep holes for treated Australian hardwood poles that are 15 and a half metres tall, protruding 12 metres above the ground. Insulators and crossarms were installed on the poles previous to erection, and poles were set according to a plan, some slightly angled on purpose.


Difficulties included poor weather, traffic, hole dynamics, and the public. Once again, as with all Connetics work activity, safety is paramount, and all the Connetics workers I worked with showed a competence and confidence that put my mind at ease. As with the Cable Jointers, the Line Mechanics are extremely proud of their  work, and set extremely high standards for themselves. I am going to refrain from commenting on the psyche of a Line Mechanic, I'll get to know them better first! Once again, I consider myself extremely lucky to be part of the Christchurch recovery and see history being made by these highly competent workers.


Installing such massive poles of wood in the ground in an urban area is no easy task. Navigating traffic, dealing with different soil types, poor weather conditions and avoiding other underground services are just some of the challenges facing Line Mechanics.

The reason that the 66kV overhead is being installed from Bromley Substation to Dallington Substation is to consolidate the damaged Christchurch power network due to the 22 February earthquake.

Four large 66kV underground cables were seriously damaged in Christchurch as well as the New Brighton Substation sinking, damaging the building and associated electrical equipment. The New Brighton Substation has been rapidly repaired already and had a 66kV overhead run to it, but it will be also relocated to Rawhiti Domain, where there is a lesser chance of further liquefaction. See HERE.

The first point if call for the Line Mechanic is to consult the 'plan'. A schematic diagram is available that shows the position the poles are to be inserted into the ground. This plan also shows other underground services, which gives the Line Mechanic an idea of where to dig.


Network planners also visit the site previously and mark the ground in spraypaint where other services are and where the recommended position is for the pole to be placed.

Poles are then assembled, in our case, a nearby lot was converted to an 'assembly area' of sorts. Insulators, crossarms and rodent guards are attached to the suitable poles and the poles are subsequently transported to where they will be installed.


Holes are initially dug very carefully, some by hand and some by very skilled digger drivers, depending on what the level of risk is of hitting an underground service. The Line Mechanics watch very carefully to see any sign an underground service (power cables, telecommunication cables, water mains, sewer mains and stormwater drains) has been exposed. Once the one-metre depth is hit, the chance of hitting a service reduces significantly, so the mechanical digger is then employed to dig to the 3.5 metre depth. The shape of the hole (in our particular case, as it changes) is a 'slot', the digger using a bucket about 500mm wide. The length of the slot varies depending on the amount of available room.

Soil types can impede the correct depth being reached. Sandy and wet soil can 'cave-in' quickly, so the process is done reasonably rapidly, still whilst maintaining safety. An interesting occurrence for me was the range of different soil types that we struck while digging. We struck black coarse sand, jelly-like mud, yellowy  beach-like sand and also clay.

To ensure rapid insertion, the pole is stood vertically next to the hole and held in place using the Line Mechanic truck's hydraulic crane and a heavy-duty chain. Once the 3.5 metre depth is reached, the pole is lifted and guided into the hole. This can be another challenge, as trees, overhead low-voltage and telecommunication cables must be avoided also. Skilled hydraulic crane drivers guide the poles in the ground.
Once the pole is in place, the hole naturally starts to 'cave-in', but also the diggers replace some of the soil dug up, and also put gravel in too. Cement powder is added sparingly, to make the soil 'firm', but not so firm as the pole will be removed with difficulty. During refilling, the pole is monitored for vertical angle and that the insulators are aligned correctly. Poles that are set at purpose (less than vertical) angles are braced underground with short hardwood horizontal poles.


Finally, the soil is compacted, topsoil and grass seed is applied. Reflective markers are attached to the poles, and they are finished! Next; installing the cables (next week!)